How to achieve gender equality in filmmaking?

There is a big gender gap between short films and feature films: whereas 50% of short films are directed by women, the percentage drops considerably in feature films. Women directors able to transition are scarce. Several international studies have looked at this phenomenon and questioned the reasons behind it.

Why is the film market losing its female creative power especially when it comes to feature films? What are the structural reasons behind this gap? What stereotypical ideas prevent women from doing their profession?

The aim of this workshop is to explore how to achieve gender equality in all areas of filmmaking, notably during the transition from short to feature, with a focus on three topics of filmmaking: finance, production, film set and network

The “Call for Action” was elaborated during the workshop at the Industry Lab of the Internationale Kurzfilmtage Winterthur. Focusing on the wide gender gap between short films and feature films, the workshop was created and led by Ivana Kvesic and Bernadette Kolonko, both SWAN Executive Committee members, in cooperation with the SWAN Presidency. Within two hours, the 15 workshop participants came up with a collective “Call for action” based on their own experiences and observations in the film industry. Being from different countries, different age groups and active in different fields of the film industry, the participants brought a diversity of perspectives to the discussion. The inputs considered essential and necessary to achieve gender equality in the film industry were worked out with the help of SWAN’s aims, various tools and inspiring discussions. The workshop, developed in cooperation with Kurzfilmtage Winterthur and SWAN resulted in a “call” for gender justice in the film industry and more diversity in front of and behind the camera.

All participants signed the “Call for Action” resolution brought up by aspiring female filmmakers and members of SWAN and are now very proud to present it to the public:

Call for Action for Gender Equality in Filmmaking

2. Representation of women in the entire film industry has to be diverse and inclusive.

3. No sexual harassment! Speaking out and address immediately the abuse of power – solidarity with the women who speak out!

4. Mentoring and coaching programs to support the careers of female filmmakers.

5. Role models in filmmaking have to be more visible and more female directors have to be in the canon of film history.

6. Networking: Female filmmakers should have space to share their ideas.

7. Space where women can talk about their experiences in film industry, also in dialogue with men.

8. More women on filmsets in every field of filmmaking.

9. There has to be money for these measures to reach equality and a cultural change in the images!

10. Unconscious bias: There have to be training programs for decision makers in film industry.

11. The participants of the workshop are for a 5050 Quota of funding to abolish the pay gap. 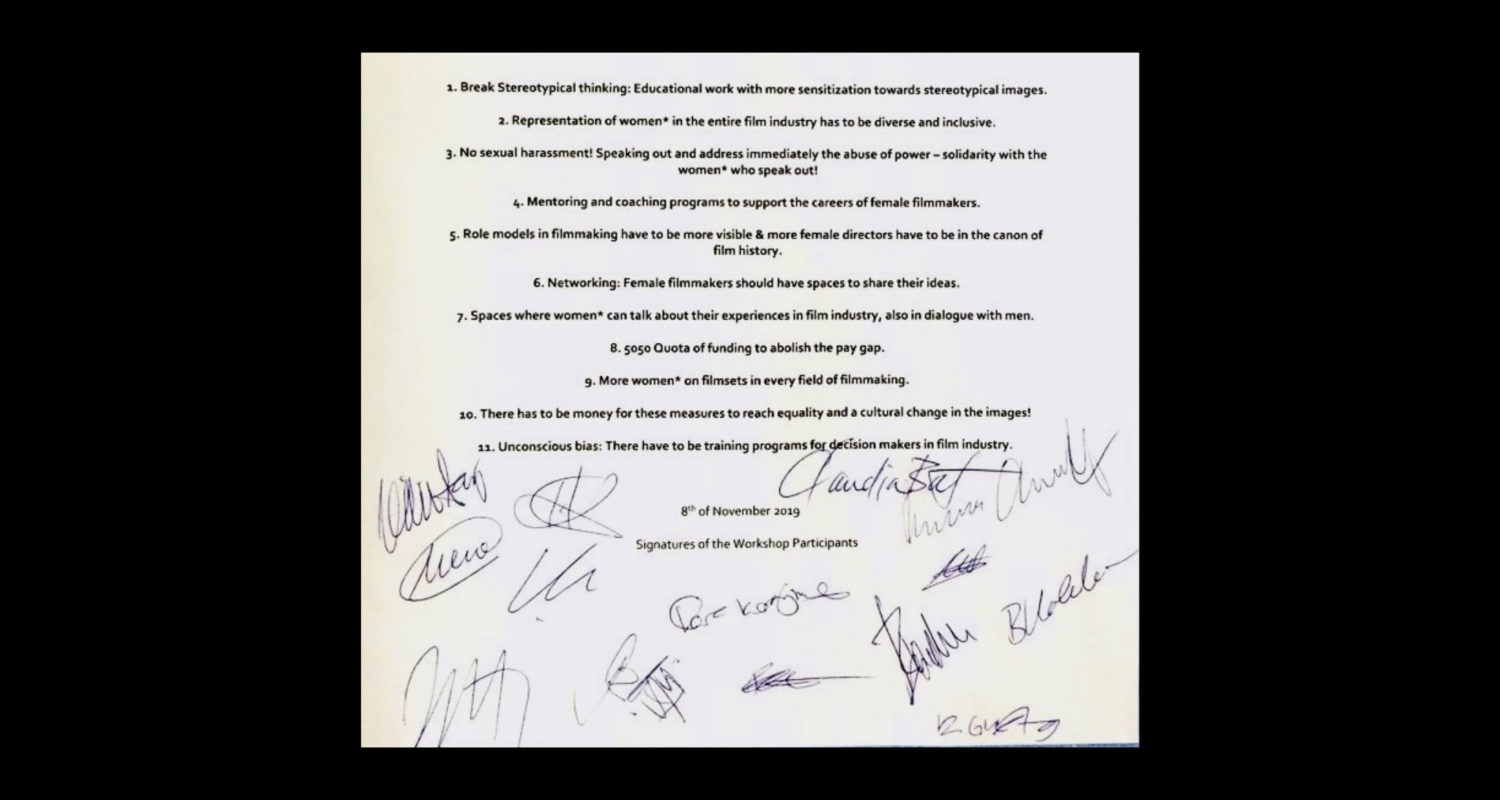 The Call for Action resolution signed at Internationale Kurzfilmtage Winterthur 2019